An Opera for Our Time: ‘The Emperor of Atlantis’ 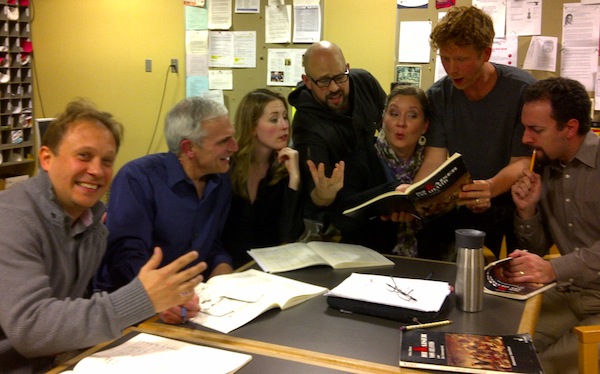 It’s been variously described as a political satire, a parable of hope, a legend, an allegory and an elusive death-welcoming parable. Composer Viktor Ullmann’s and librettist Peter Kien’s opera, The Emperor of Atlantis, may be short, but it leaves audiences with a great deal to ponder.

It’s the tale of a remote, despotic, increasingly mad ruler who decides that a war-to-the-death of all his subjects, men, women and children alike, is the only way to purify his country. Death takes offence at having his realm usurped, and goes on strike. Nobody dies. Pain, lingering illness, misery, even executions don’t end in death. Frustrated, the Emperor realizes he must make a deal with Death. Death will return, if the Emperor agrees to die first.

Music of Remembrance presents The Emperor of Atlantis Nov. 16 and 18 at Benaroya Hall’s Nordstrom Recital Hall. (It’s one of several productions worldwide recently, including one last month by English Touring Opera.) Composed in 1943 in the concentration camp of Theresienstadt, Emperor was never performed there. It was banned. (The first performance was in Amsterdam in 1975 and there have been many presentations since.)

“We don’t know why it wasn’t performed at Theresienstadt,” says Mina Miller, artistic director of MoR. “There were rehearsals there in 1944, but by October 1944, both Ullmann and Kien had been sent to Auschwitz [where soon after Kien died and Ullman was murdered]. The allegoric allusions to Hitler were so provocative the [Jewish] Elders [who ran Theresienstadt] thought it might be dangerous. We don’t know if the Elders or Nazis prevented it or a combination of both. There’s no definitive answer.”

Ullman wrote while at the camp: “It must be emphasized that Theresienstadt has increased, not reduced, my musical work, that by no means did we sit weeping at the rivers of Babylon, and that our desire for culture equaled our desire for life; and I am convinced that all those who, in life and in art, struggled to force form upon resisting matter, will agree with me.”

“I didn’t know the music beforehand,” says Seattle Symphony music director Ludovic Morlot, who will conduct the MoR performances. “It took me a while to really grow to it. There’s a unique language, and it’s uneven, but especially when Ullmann creates a recitative it’s quite stunning. The instrumentation is so modern, it’s bizarre (13 instruments including alto saxophone, banjo, harmonium and harpsichord). Maybe it’s all they had. My grandfather was a prisoner of war and he learned the violin because it was the only instrument available.”

The Emperor of Atlantis has seven characters: the Emperor (Kaiser Uberall), the Loudspeaker, Harlequin (who is 300 years old and represents life), Death (who is as old as time), a Drummer, a Soldier and a young Girl.

“These are real people, not caricatures,” says MoR’s stage director, Erich Parce. “As the opera opens, we are looking at a theater in the aftermath of a bombing. One of the things that influenced me was a report of a performance of Beethoven’s Eroica (the symphony of hope), in the ruins of a Berlin concert hall after World War II.”

“Who is the Kaiser?” asks Parce. “What is Ullmann trying to say in the end? What I came up with was the Kaiser sees himself as the savior of his people and Death watches in amusement, knowing we’ve seen this all through history. That has to be obvious. It could be really romanticized, but we have to see this Kaiser becoming more crazy, see him becoming even more self-absorbed. Obviously, he’s depicting Hitler.”

Parce, who has a 12-year-old son, feels strongly that young people should come to this.  “We need to make the kids understand, for them to translate the information to today’s world. They all have grandparents. Children do get it, once you give them some background,” he says.

“Mina and I were doing a concert at Garfield High School and a kid yelled, ‘What does this have to do with us?’ And I told him back: ‘It has everything to do with us.’”

“Creating art and beauty says so much about human potential,” comments Miller. “This opera was created in a concentration camp. This is a work which defies Nazis. It’s a universal message for all faiths. Within the worst of situations, they still fought to create, to entertain, to live life.”

Music of Remembrance has put aside 100 free tickets for young people. Get them at musicofremembrance.org. Pictured above: Maestro Ludovic Morlot, Director Erich Parce, and the vocal cast of The Emperor of Atlantis.